I slept… until 1130am yesterday! I couldn’t believe it! Actually, I could. I’ve been taking cat naps the last few days and have been feeling super exhausted so it makes sense. I really must have needed some sleep.

I woke up feeling really great. I did 50 push ups and 50 crunches,  ate a yummy bowl of cereal with Kashi Go Lean, Fiber One Chocolate 80, and sliced strawberries, took a shower, tidied up a bit and waited for Barry.

Barry arrived with my graduation present, which he had been waiting for from Fed-Ex. He got me  a new stethoscope!!! Woo Hoo! Its pink and engraved!

After beating him at another game of Phase 10 (he got me my own deck), we decided it was time for him to experience a real Philly steak. I’ve said it before, but I’m definiatly a Geno’s fan. “Four wit with wiz, please, and a cherry soda.”  (I was buying for the folks back home, too). I told him he had to eat it with the provided cherry peppers, as well. Barry enjoyed his first experience with Geno’s. 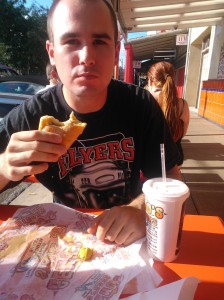 We took a visit to grandma’s house to drop off her coleslaw container, and her precious Spumante. She was surprised by our visit and stayed there chit chatting for a bit. My aunt, who lives with her also told us the news of her adopting two puppies from a shelter in Georgia. She explained that the dogs were brother and sister, had come from an abusive home, and were about to be put down. They are absolutely loveable! I believe they were dalmatian and bulldog mixes, but they looked a lot like pitbulls with spots.

By the time we arrived back home it was about 830 or so. The day really flies when you  sleep until noon!

We, for some reason, were pretty sleepy, so we laid down until we heard back from our friends. After Lauren got off work, we met her and her boyfriend for frozen yogurt at Yogurt City. I got the usual. Also delicious! 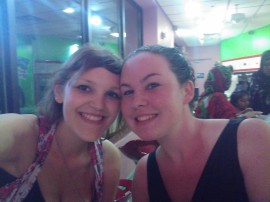 I just realized, after looking at the picture, that our bowls all really fit our personalities!

During the conversation, Barry said, “Its weird… the longer I go since I’ve eaten Geno’s, the more I really want another.” A little fact about Mike and Lauren: if you mention Philly cheesesteaks… we are getting Philly cheesesteaks. In this burst of spontaneity, we piled into Mike’s car and drove back to Philly around midnight. Although Pat’s was open, Barry wanted another steak from Geno’s. Despite my warning about the hot sauce, Barry put it on his steak. When they state “hot,” they really mean it! Thank goodness he had a cup of Sprite!

Following, yet another delicious steak, we drove around Philly to kill some time. We finally made it back home around 330am! Guess what we did. NOT SLEEP! We went swimming in the pool and played a round of pool basketball. Can you guess who won? The Girls, of course!

Finally, being the sleepy party pooper, I initiated the mosey out of the pool. Finally, sleep!

If you’d like to learn more about the shelter, Middle Mutts,  or donate to help fund the adoption of other pups like Buster and Coco, please visit their facebook.

Yesterday morning began with some competition: me whooping Barry’s butt in his favorite game: Phase 10!

He looks so defeated, doesn’t he? HAHAH

Its okay, though, because we followed this the brunch of champions: froyo from Yogurt City!

I  know I’ve been on a froyo kick, but its just so good, and I choose healthier options such as sugar free yogurt and lots of fruits! 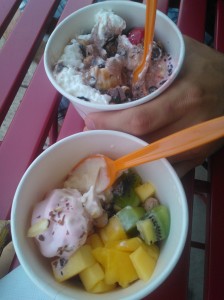 Can you guess which cup is mine and which one is Barry’s?

The remainder of the day was filled with some personal stressors and I tended to crackers. Some how, I’m not sure how exactly, but by 4pm, I had eaten my normal allotment of calories… I was confused, already frustrated, and took it out on myself with purging. I felt crippled, again, by this disorder. As a curled into a ball in my bed, I called Barry, crying hysterically out of frustration. I felt bad putting him in that situation. I mean, what can he say? But it meant a lot to know he was there to listen. Talking to him on my way into night shift helped to mellow me out and set me up for a good night.

It turned out it was Associate Appreciation Day at the hospital and they treated us with a BBQ-esque lunch. I headed down to the caf to find burgers, wraps, and the like, along with salads and fruit. 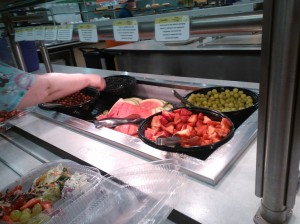 I avoided the salads for the most part, except for the cabbage salad, which I want to see if I can make, and grabbed some fruit. After eating this, I felt guilt. 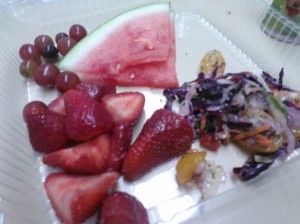 Why? I started back with smart choices at my next meal. There is no reason to feel guilt over fruit! I kept myself busy at work, and proceeded to have a fruit powered shift.

After a long and completely exhausted  2 hour staff meeting, lots of coffee, and half a French cruller later, I finally got some sleep!

After a brief nap, I woke up, showered, and got ready for date night. I was in a much better mind set after a good night of eating and self control.

This morning, since it was Barry’s first morning back, it was a blueberry pancake morning. The special guest star? Bar Harbor Wild Blueberry Preserves! 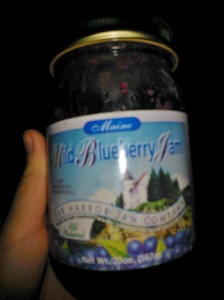 I was pretty excited when I find these easy to make complete Easy Packs by Hungry Jack. Its the perfect size for a few people and they had Blueberry Wheat! Even better. Not having blueberries in the house, I warmed up a few tablespoons of the preserves and drizzled the newly formed syrup over the poured batter. Aside from the last three pancakes getting a little toasty, they were a hit. Barry, being the blueberry king that he is, doused his plate with blueberry syrup, as well. To finish the meal with some protein, eggs. Over easy for me and medium for him.

We kicked off his first day back with a date at the shooting range, followed by a ton of errands! I introduced Barry to Wholefoods today! I love when I take people there for the first time. Its like they are little kids! Barry fell in love with bakery, as most people do. He wanted to buy one of everything! He left with a brownie cheesecake muffin and a cookies n cream cupcake. I was a good girl. We all know how I get around sweets…

Its so funny! He’s already planning our next trip to Wholefoods, including having lunch there. He was in love the meats department. I don’t think he believed me when I told him how beautiful the meats were. He would up spending a few bucks on meats, as well.

After continuing with errands, we headed home. I read in a magazine that the calcium in frozen yogurt helps relieve cramps. Best excuse ever to take your boyfriend out for froyo!

Barry definitely has a sweet tooth for similar tastes as myself… Chocolate and peanut butter. He opted for the cheesecake froyo at Yogurt City topped with chocolate, caramel, Reese cups, chocolate jimmies, blueberries and bananas. I went with the no sugar added strawberry yogurt topped with kiwi, mango, strawberries, and sliced almonds! I do believe I am developing quite a skill for froyo perfection!

We headed back to the house after about 5 hours of being out while at Wholefoods, we picked up a tempeh that I have never seen before: Fakin Bacon smoky tempeh by Lightlife. While cooking it, the kitchen actually did begin to smell like bacon. I also roasted some bell peppers, sliced baby carrots, onion, tomato, and cauliflower seasoned with garlic and basil. Topping a bed of spinach, I think this was the healthiest meal Barry had had in a long time! Plus, he had never had tempeh before. ( We all know I’m addicted to the stuff.) I always enjoy a roasted veggie and tempeh salad drizzled with BBQ sauce, and today was no different. Also, while at Wholefoods, we picked up Annie’s Organic Hot Chipotle BBQ sauce, since we both have a love for sweet and spicy. It had much more of a kick than either one of us expected, and our lips were tingling a good while after eating our salads. I can’t wait to BBQ some chicken breast with this stuff! 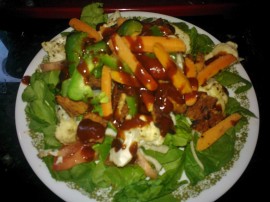 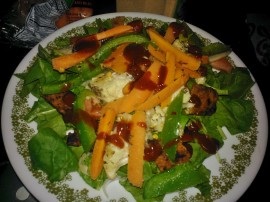 We wrapped up our evening with oreos and PB, and some hockey. It was a nice day spent with the boyfriend. Tomorrow… road trip.