A girlfriend of mine suggested that I’m hungry at night because I work shift work. Since most of my shifts are at night, it could be throwing my body’s rhythm off.

But I realized last night that on the days I sleep late, I eat more. One would think I’d eat less because I’m awake less hours, right?

Yesterday, I experienced a few firsts:

I slept in yesterday until a phone call woke me around 1130 am. I was still pretty hurt by the happenings with my mom from the night before and I think I slept to cope. Barry came over after his dentist appointment and I made brunch.

Yesterday was National Fried Scallop Day. I wasn’t about to go hog wild with scallops but I remembered I had a small convenient frozen package of small bay scallops. After browning them in a skillet, I  combined it with crumbled turkey bacon and fat free cheese to create omelets for Barry and myself, while he made us some coffee.

While eating, I took the opportunity to apologize for how hard-headed I had been the night before. I  was terrible to him. I wouldn’t look at him or talk to him. He didn’t do anything wrong, I was just too caught up in my own head. In fact, Barry, and my girlfriend for high school, Maggie, really tried to make my day special. Barry had flowers delivered to the house, pink lilies, of course, and they were beautiful. They wound up being the center-piece on the table of my birthday dinner. And Maggie surprised the heck out of me! I had no clue she was coming over! To top it off, she got us tickets to see Demi Lovato in March!

After a few odd and ends, Barry and I drove to Philly. We had time to kill and decided to grab dinner before heading to our destination. I suggested Tony Luke’s on Oregon Ave. Neither one of us had eaten there, but its a pretty popular joint. Its got a pretty decent-sized menu for a joint of its size. A few things caught our eye on the menu, but I begged Barry to get the Italian. I forgot to tell them no cheese, but delicious nonetheless, delicious. The Italian is a pork sandwich with spinach or broccoli rabe and provolone cheese. I, of course, opted for the rabe and asked for red peppers. While we were waiting for our sandwich, I grabbed hot sauce, sliced pickles, and cherry peppers for snacking! I love peppers, if you couldn’t figure that out by how often I eat them 🙂 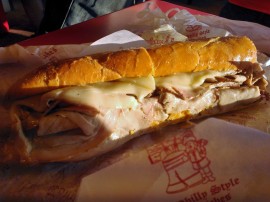 One of my favorite things at Pat’s and Geno’s is putting cherry peppers on my steaks, so I was rather pleased to see that Tony Luke’s had them. I must have been pretty hungry, because I had eaten three cherry peppers, straight up. And they were good! Barry and I shared the Italian and we can not wait to go back!

With full stomachs and firey mouths from the hot sauce and peppers, we headed off to our destination: The Wells Fargo Center!

Barry is a huge Flyers fan. I, on the other hand, barely know anything about hockey, but love sports! Barry took me to my first hockey game and I had an absolute blast! I was learning the lingo, yelling at the officials, and screaming, “Knock’em out!” I had an absolutely wonderful time at the game and I can’t wait to go back! We discussed this concept of returning to the stadium and I voted that we make a tradition of it! Tony Luke’s for dinner and then the hockey game! What a great birthday present and nice way to spend our 5 month anniversary! 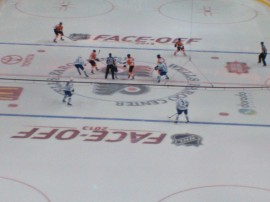 “Look! They have a Sammy stand, hun!” I turned to see a concession stand called Melissa’s Farm to Fan, offering products like trail mix, Nutrigrain bars, black bean burgers, and apples. I had never seen that before in a sports complex, but I’m glad to see that the center is offering healthier alternatives.

I thought it was really neat how the soft pretzels were shaped, too! These are one of Barry’s weaknesses. My weakness? FroYo! Yes, froyo at a hockey game! I find it funny that I am always cold, I bought a cup of coffee, and I am bundled up, chowing down on a bowl of delicious frozen yogurt! As Barry and I circled the complex, smelling the wings and hot dogs in the air, I tried to figure out if ice cream was what I wanted, or if froyo was the way to go.  After some debating, I went with the frozen yogurt, because I love topping bars!!!!  I got a small squirt of all 6 flavors (chocolate, coffee, apple sorbet, salted caramel, vanilla, and cake batter),  from Gozen Yogurt, and topped  the bowl with cookie dough pieces, strawberries, and some mint chip pieces. Oh yeah! 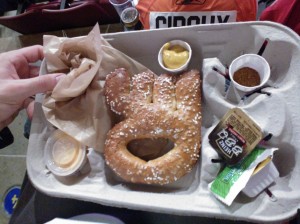 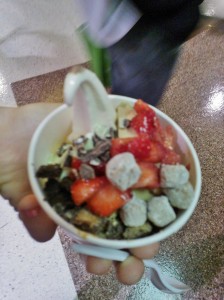 While I allowed Barry about 3 bites of this bowl, I watched the couple in front of us attack this bad boy! It looked spectacular! I could not believe how huge it was, but they tore it up!

I also came to the conclusion that Phillies and Eagle’s fans go to Pat’s and Geno’s, while Flyer’s fans head to Tony Luke’s. The line of bright orange pretty much helped me come to this conclusion.

After the game, I came home to finalize all of my paperwork for my job interview. While I was doing so, I had some serious nervous energy and ate. But the beauty of it was that I did not freak out and I did not purge. My one focus was on nailing my interview.