When the going gets tough, the tough gets Reese Pieces. 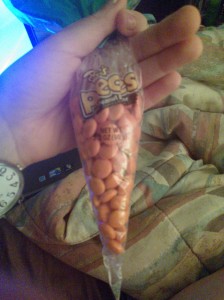 I’m a pretty strong person, but I still felt that things were unresolved. I was laying in bed, having trouble falling asleep, and decided I needed something popable: Reese Pieces. These may have been left over from Easter, as you probably guessed from the carrot shaped bag.

Prior to the Easter throw back, I began to feel down on myself about not going to Zumba and still eating. Silly, I know. Especially since I was technically, still  under my allotted calories.

I find it ironic: 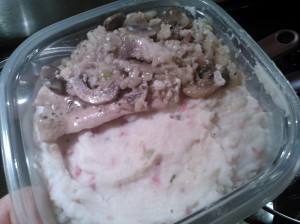 Food is a major contributor to my anxiety, but cooking levels me out. So thats exactly what I did. I called my elderly neighbor to see if he would like Chicken Marsala for dinner tomorrow night. (He eats all of his meals out at the same restaurant). One thing I love about cooking for him, is that he needs to gain weight, so it allows me to whip out my inner fat girl chef. I whipped up bacon cheddar mashed potatoes and plated the chicken breast over top.

I also prepped my dinner for night shift for tonight (recipe below).

Yesterday, in my state of blah, I wanted to feel like I could potentially make myself useful. I sent out a few resumes, studied for the NCLEX, and, lastly, filled out the application to a job I’ve wanted for a long time. (Say some prayers.) This morning, after showering and getting myself pertty, I hand delivered my application and resume. I followed this up with spending entirely too much money at Walmart! 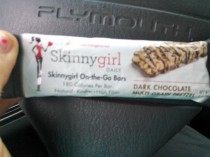 Fuel for the morning was half a Skinngygirl On the Go Bar. How can you go wrong with Dark Chocolate Multigrain Pretzel? It wasn’t too shabby. In my opinion, like the other Skinnygirl bar I tried, it contains a decent amount of sugar.

After the Walmart adventure, I settled into bed for a nap before work. This brain of mine was working hard, and I jumped out of bed to grab pen and paper about an hour or so into my nap! I had dreamt up 2 recipes and had to write them down before I forgot them! The best part is that I think these are actually do-able recipes! I can’t wait to give them a shot! 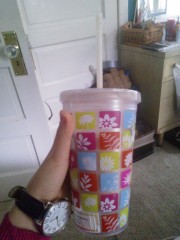 Smart eating is a necessity after these anxiety munchies, so with big fresh peaches in the house, but a lack of vanilla shake mix, I made a Peach Melba Protein Smoothie.

This was probably one of the tastiest I’ve made in a while! It was delicious and filling! It kept me full for a few hours, but my tummy started rumbling and I cracked into a sugar free Creme Brulee rice pudding, topped with cinnamon, of course. It was a tad bit sweeter than the normal stuff, but not too different other than that.

In the Walmart splurge, I picked up the Vanilla Biscotti K Cups for work and mixed it with sugar free french vanilla creamer. Its a good combo, if you were wondering.

Once I arrived at work, I got into a conversation about Krispy Kreme. They could not believe I have never had one! God Bless this mom when she told me I was a twig and could eat 6 of them! She told me I wasn’t leaving the room until I took one with me. I took my pick and and the one with the pretzel topping looked the most appetizing! I cut 1/8, yes, an eighth, of the Caramel Chocolate Pretzel donut to try and trashed the rest. This was my first and last experience with Krispy Kreme. The donut was filled with chocolate and topped with crushed pretzels. I’m actually glad I wasn’t a fan, once I saw the calorie count on the bad boy. But at least now I can say, I’ve had one.

I never thought I’d say this, but I’ve really been digging beets. Thats why, instead of my normal salad for last night 12 hour shift, I tossed together spinach, canned, sliced beets, sliced baby carrots, onions, and crumbled fat free feta for an all-star salad!

Over medium-low heat, cover the beets, with pepper, carrots, half the sliced onions, half the slivered carrots, all the orange juice and dressing. Allow the veggies to steam and cook in a covered skillet until the juices have dissolved. Uncover, turn off heat, and allow to cool, while chopping spinach. Spoon beet mix over spinach and top with crumbled feta. 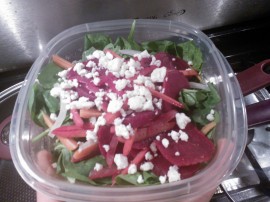 I grabbed some balsamic vinegar to top my salad with from the caf and wound up spilling a bunch on my hand. Its hours later and I can still smell it! The good new, though, is that the salad hardly needed anything since the beets were so full of flavor! Yum!

After a busy night of crying babies and glucose monitoring, I was pulled to sit for the last four hours of my shift. I was pretty pleased since I had worked 8 hours and hadn’t had the time to even glance at my NCLEX book! I spent the last four attempting to study and review and resist blogging! (I just can’t help myself!)