Barry and I have a a serious weakness for soft pretzels. In all honesty, anywhere, anytime describes our craving for the baked dough! Therefore, I set out to duplicate his favorite pretzel: Auntie Anne’s Jalapeno Pretzel.

Heat the milk and white sugar in the microwave for about 1 minute. Sprinkle the yeast on top, and set aside. (After about 5 minutes, the yeast with foam and bubble.) Meanwhile, in a large bowl, combine the flours, salt, and brown sugars. Cut in the butter spread. Combine with the yeast mixture, using your hands or stand mixer for around 5 minutes. (The dough will be tacky.)

Cover the large bowl of dough with a towel, and put in a warm place 70 minutes. (I microwave the bowl for 30-40 seconds and leave it in the microwave to rise). Preheat oven to 350 F and line a baking sheet with parchment paper. Proceed to spray the parchment paper with non-stick cooking spray. In a separate container, dissolve the baking soda in the warm water, and set aside.

Using your hands, mix in the chopped jalapeno and granulated garlic. Divide the risen, sticky dough into 12 even pieces (6 for larger pretzels). Sprinkle 1/4 tsp of the remaining flour around the first piece of dough. Roll it out into a thin strip of dough and make into your pretzel shape. (The technique Auntie Anne’s uses is a lot harder than it looks). Dip your shaped pretzel into the baking soda, shake to dry, and place pretzels on the sprayed parchment. Repeat this with the remaining dough.

Evenly sprinkle the chopped cheddar, and additional jalapenos, if desired, over the pretzels and bake for about 22 minutes. Just keep an eye on them after about 18 minutes.

Even if you make 6 large pretzels, this recipe saves you about hundred calories  and half the fat, from the Annie’s alternative!!

After making these, I met up with Barry and a few friends to celebrate a birthday. Upon arriving (I was late since I had work), Barry had a plate with about 3 bites of some cheesy, doughy thing on it. “I saved you the last bit of this…” What is it? It was a soft pretzel smothered in crab dip, monterey jack cheese, and green onions.

On the next batches of pretzels I have two goals:

This morning began with my Copy Cat Shake! I love this one! But I must admit, it was a rather clumsy morning. When I initially transfered my shake into my travel bottle, I spilled quite a bit onto the counter. Then, once I got into the car, I tipped the bottle over and some spilled onto the floor. And smart me, I don’t have floor mats. Despite trying to clean it up, I’m so nervous that the next time I walk in my car, I’ll be choked by the stench of sour dairy products.

I have felt bloated all day! Seriously uncomfortable! I keep looking at my belly thinking What the heck is going on? Where did that come from? You look pregnant!

This gets frustrting, especially since I’ve been happy with my eating last last two days. When I arrived home, after todays events, I wanted something sweet. Not because I was necessarily hungry, but just because. I allowed myself two Nutter Butter cookie sandwiches. This quickly spiraled, not terribly, into pretzel sticks and nutella. Although it was not an earth-shattering binge, it was one of which should not happened. (And I’m sure all that salt did not help the bloate feeling.)

Anyway, todays events began around 830 with a drive to the funeral home. I attended the viewing and as I went down the line of daughters, my emotions were harder to hold back. “He loved you! He always wanted to best for you,” said his oldest daughter. That was it! The waterworks started. We headed over the church, were the euologies were presented but the 3 daughters, and some of the grandchildren. When the beautiful ceromony ended, I reunited with my grieving family in front of church. As I hugged my cousin, he grabbed me tight and began to cry. He is one of those people, who I can not see cry. As soon as I see a tear in his eye, I started crying… it never fails. The burial consisted of a bagpipper and a 21 gun solute.

We finished the afternoon at the luncheon. I didn’t feel it was appropriate to photgraph my food here, concidereing the circumstances. I filled my plate with loads of fruits and vegetables. The grilled chicken breast and roast beef were tops! I ket going back for more. I treated myself with a cookie and order three cups of coffee. Yes, three! Not because I was THAT tired but because the mugs were so tiny! It held maybe three ounce of coffee!

Feeling full and bloated, I was worried about my eating the rest of the day. After snacking on some rice cakes and nutella, I made a roasted cauliflower salad on spinach with some sliced honey ham. 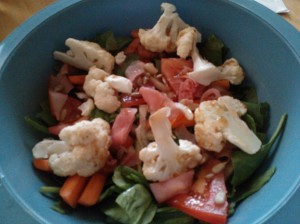 Shortly after, I recieved an interesting phone call from a friend from high school asking to help him with a film project. He is curently filming a trailer to get funding for a company to start production on an independent film. Our society is obsessed with zombies. I just don’t get it. Nonetheless, I played a mourner at a funeral (of all days to play a mourner), who at one point is killed and eated by a zombie. I can not wait for the screen shots to come back so I can share them with you! Its hilarious to think about some of the shots he got! It took my mind off how much body hating I was doing and it was a fun time.

After filming with some high school friends, Mags and I went out for froyo.

I hadn’t had frozen yogurt in the longest time! I did not have any last summer because I was “sick.” The two of us used to go out every week for froyo back in the day. I made very smart decisions at BerriYummy! I grabbed a shot of no sugar added vanilla froyo and topped it with sliced almonds, strawberries, raspberries and mangos, and, I’ll admit, a sprinkle of crushed butterfinger! Spectacular! A winning combination! (Mags went with the chocolate cravings).

After departing, I headed home and went to pretzel town.