I a so tired of having an upset stomach! I left work early last night around 3am. When I arrive home I snacked on bread and pretzel sticks in the hopes of absorbing any acid that could be irritating my stomach. For the past few days, saltines and diet ginger ale have been m best friends. But its just unnatural for this to be a diet for 3 days straight.

I curled in bed and had the hardest time falling asleep. I finally fell asleep in the fetal position, with my behind up in the air and my face in the pillow, around 5:15am, I believe. I slept until about 9am and enjoyed a small fuji apple. In fact, the apple hit the spot so well I ate another for dessert later in the night. After my apple, I whipped up a bunch of shakes! For Frank and James, a filling Banana and Nutella shake for their fishing trip; for dad, a Cherry Cheesecake Shake for is drive to work! 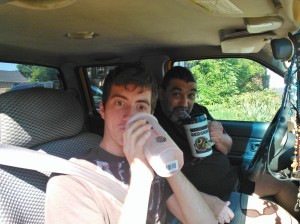 I walked down to the Dunkin Donuts for Customer Appreciation Day, and got a free medium iced coffee. It was just what I needed to start the sunny day! With a little caffeine and an apple in my belly, I was motivated to start my day! I went for about a 3mile walk to the store to pick up a few items. On the shopping list was PopTarts. I never buy PopTarts, but a little birdie, named Barry, told me about the new ones filled with peanut butter. Did you really think I could resist this? 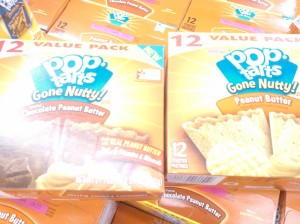 They were great! My one problem with PopTarts, not just this particular flavor, but all of them: the CALORIES! 200 calories per pastry. Hello! There are two pastries per pack! Do think people only eat one? PopTarts are delicious! Come on! Nonetheless, both of the Chocolate Peanut Butter PopTarts found their way into my stomach throughout the day.

To off set the sugars, I snagged the last BBQ chicken thigh left over from the guys dinner last night, shredded it up, and tossed it with roasted bell peppers and cauliflower. 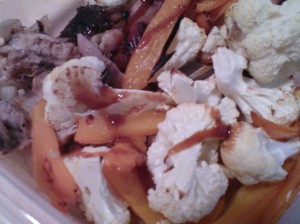 Midway through the day, the stomach aches started back up. Before I knew it, I was back to the saltines. In the last two days, I’ve eaten two sleeves of saltines! Oh yeah, then I got sick. Yay.

After lying on the couch for a little bit, a craving hit me that I had last night: a calzone, panzarotti, or stromboli. I just wanted something related to pizza, but not pizza. I think its because everyone on Facebook keeps talking about the Festa (the Italian Festival) around the corner from my house. I mentioned it to Frank, and a small ham and spinach calzone arrived about 45minutes later. We split it four ways, and my stomach felt mysteriously better.