I had a tricky time sleeping last night… just too much nervous energy and making mental notes of things to say in my interview.

Today was the day I have been looking ofrward to for over 2 years: interviewing for a nursing position on my unit. There were so many candidates! I believe there are 12 people interviewing for 2 positions! Talk about pressure!

I woke up before my alarm went off and took the early rising as a sign to be productive. I turned on OnDemand and completed a few 10 minute workouts, and followed it with some hula hooping. I felt energized, and get showered and stressed for my interview with a clear mind. The nerves did not kick in until I walked into the conference room, where I was greeted by 7 familiar faces: my 2 managers, the head CNA, and 4 nurses. I don’t think I stopped smiling the entire time! I bet I looked like a complete idiot! I couldn’t help it! Not only was getting this interview like a dream, but I felt great about my interview! I walked out feeling calm and confident. I pray that this is sign of good news to come!

Please keep me in your prayers.

Arriving home, I was surprised how hungry I was, despite my late night nervous eating, I whipped up a shake. Today is National Caramel Custard Day. I recalled a Hungry Girl recipe for quick caramel custard, but I thought of one myself to experiment with. My final decision was to make both and decide which one I liked best. I opted for the experiment for breakfast and assumed it would keep me full until my next meal, and that the unusal ingredient was add a different texture to the shake bowl.

I was right! It kept me full until I later woke up from a nap to head off to work! I expected the rice in the rice pudding to add a thicker consistancy, but it actually just blened with everything else. I quite enjoyed it.

I was soo thankful to have slept this afternoon! I woke up feeling refreshed and pleased that my hair and makeup still looked great. Don’t you love when that happens? Especially if you wake up that way! It was time for the Hungry-girl version:

This one felt a little lighter, but I had to add sooo much xanthum to thicken it. Both were tasty! The rice pudding-based bowl was a bit thicker and sweeter, while the HG bowl had that Greek yogurt smoothie tartness.

I thought the protein from the yogurt would keep me super full but after my rounds at work, I scarfed a Granny Smith! It was delicious, tart, and hit the spot! I also brought my Bubba Keg again, filled with coffee. I fell in love with a new sugar free creamer from Coffee Mate. The name “Italian Sweet Creme” caught my eye and when I read the nutrition label and saw it was on sale, it was a done deal! I haven’t regretted my decision! It soooo good!

So, fellow foodies, which do think would taste better? Try them out and and let me know! 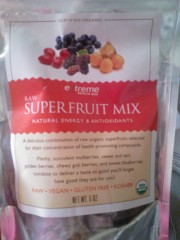 I was on the floor for the first 4 hours of my shift and spent the remaining 8 in the 1:1. Around 3am or so, I was happy to step out of the room to eat. I was pretty hungry! Either that, or I was really looking forward to my meal! I actually ate a meal of 250 calories! Thats a pretty big accomplishment for me on a night shift! I had packed a romaine salad and including a bunch of different add-ins: chopped pickles, cucumbers, onions, baby carrots, some roasted and unsalted sunflower seeds, bacon crumbles, and dried fruit. The dried fruit was something I forgot I had! It was a Raw Superfruit Mix by  Extreme Health USA. Before buying this blend, I had no idea some of these berries existed: mulberries, sweet and tart golden berries, goji berries, and blueberries. To finish off the salad, I warmed up the Tostito’s Cantina Chipotle Salsa. It was spectacular! I wanted something else throughout the remainder of my shift and ate a knock-off Apple Cinnamon Nutri-grain bar. I typically, don’t find these satisfying, but the mix up from my normal snacks made it pretty enjoyable. 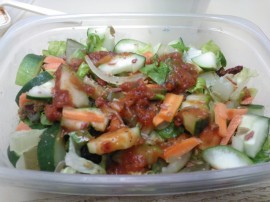 The killer of my shift was working with some of the nurses that I interviewed with earlier in the day. They were completely stone-walling me!  A hint!  Anything! Throw me a bone!