Theres is not a day that goes by that I do not thank God for his blessings. I don’t just thank Him for family and friends and shelter, but for the strength that He gives me, the drive and determination that pushed me through school, and for the ever-growing, ever-opening heart that HE has given me.

When I see videos like this I can not help but thank God over and over and over again for blessing me to be one of the people that can make a difference in this hectic, scary world.

I LOVE what I do. It is NOT to be thanked or praised, but because we make a difference.
We are the shoulder for someone to cry on. We are the fighters that won’t stop fighting. We are here to help those who cant help themselves.

I LOVE what I do.

Have you ever been on a blind date? Last night was my first.

Blind dates are nerve-racking. There’s all these unknowns and unwritten rules. Then you try to figure out what to wear. Its like a job interview. Nothing provocative, not too conservative. Do you have a drink with them? If things work out, do you kiss this person you just met?

Clearly, I am not a dating guru.

Maybe its just me being paranoid.

For the sake of the blog, I googled “blind date dos and don’ts” and tons of pages came up!

I’m just glad my girlfriend set this up and was there to help out this new experience.

We met at a bar called 1984, which is kind of an arcade bar. I was kicking some Ms Pacman butt! The bathroom was plastered with Michael J. Fox wall paper!

A little after the band started, we headed to Applebees for continued fun and late night appetizer specials.

By the way, things went great and we have plans for another date! He walked me to my car and after I got in and saw he had walked away, I screamed like a little gitty girl!

I woke up this morning, still happy with the way things went last night.

I made myself a nice breakfast to get today started. A waffle-wich!

Drizzled with a bit a sugar free syrup! Yummy and filling!

I planned on spending the entire morning finishing up some projects due this week, when Frank asked me if i was busy. ” I’m writing a paper. Why?” I took Frank to the hospital. It seemed like fluid overload related to his congestive heart failure.

I felt bad that I could not stay with him, like I usually do, but nursing school doesn’t care about the unexpected.

I headed off to work for a relatively uneventful shift. I was seeing red, though. It may sound like a silly thing to be frustrated over, but someone ate my dinner! I keep a couple frozen meals at work, labeled with my name. I brought steamed broccoli to have with my Lean cuisine. Well,when I went to get it… its not there! For someone with an eating disorder, who plans her meals, this is a big deal! 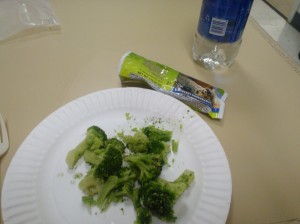 Luckily, I had eaten well today, and had spare calories. I keep an emergency protein bar (Blueberry Pomegranate Zone Bar) in my locker, so that, along with the steamed broccoli and an applesauce I jacked from the unit fridge. Not exactly what I had in mind for a Sunday night dinner…

Last night was my first night back. I swear I was more nervous returning to work than I was the first day I started. Everyone was so welcoming and complemented me on my progress, ie. weight gain. I happy as I was, constantly being reminded of how much weight I gained was a bit like poking me in the rib with a stick. 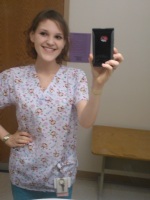 I started back on the desk to ease my way back in, and it was like I never left!
I ate dinner with the other Aide, Claire, and enjoyed my first ever Lean Cuisine meal, Lemongrass Chicken. The broccoli slaw was just what it needed. (I’m a sucker for veggies!) I was afraid that the lemongrass would be too strong of a flavor for the TV dinner, but I think the slaw helped distribute the sauce really well.

(Not specific to Lean Cuisine, but have you ever realized that the meat in frozen dinners never actually looks like the meat that its supposed to be? Like the Salisbury steak looks like some baby food glued together with some gravy, and the chicken looks like rubber? Just an observation…)

I saw a parent of one of the patients grab coffee and peanut M&Ms. I was craving that till the end of my shift. I darted to the vending machine to snag some, but then faced a dilemma. I had a ten dollar bill, a one dollar bill, a quarter and a dime. Which to choose: the Fiber One Chocolate Brownie or the Peanut M&Ms??? To be a good girl, I put in my dollar bill, quarter, and dime, and enjoyed the brownie, to which I topped, with some hospital-sized Peanut Butter. (If you didn’t know this PB pretty much goes with everything!)

Still jonesing for those M&Ms, and being so proud of my eating habits, I stopped by 7Eleven on my way home, where I also indulged in some Butterfinger Bites.
I started going to town! Luckily, I caught myself and stopped the midless eating. It was too late of course because the calories had already been swallowed…
The star of this little sugar rush was Cracker Jacks Cracker Jack’D:

The PB and Chocolate mix! Heaven!

I was tired when I got home, especially after my sugar binge… I put on my hula hooping song, “Don’t Stop the Party”by Pitbull, which, of course, drove my dad crazy (yes, hula-hooping is very therapeutic)! I followed up with some more Pitbull, “Culo,” and finished with PSY. Then I crashed around 0130.

I set my alarm for Church this morning, but it was just not happening! I woke around 1030 feeling guilty about my binge so I went for a quickie walk/run. When I got back, dad had scrapple in the frying pan. For those of you who don’t know what scrapple is…let me explain its porky-loafy goodness…

Scrapple is basically what it sounds like… the scraps of the pig that don’t get used, mixed with cormeal and spices. This morning we used the lean beef scrapple by Hatfeild.

To balance this, I through some of it into an egg white omelette stuffed with bell peppers, onions, and spinach, a bit of shredded fat free mozzarella (dad wanted sharp cheddar). And like with most things, hot sauce was the dressing! Half way through, I realized I forgot the mushrooms! I told you I’m a sucker for veggies! 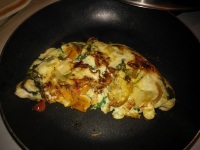 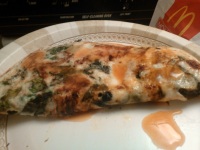 Dad got the same thing, but platter style.

If you’ve never tried scrapple, I recommend it. Just make sure you get it theright way, crispy outside and soft inside. Diners in my area, Jersey, and Philly are primo! Sometimes, you get lucky enough and the diner makes their own!

Its been pretty icky here, in Wilmington.

The news says its one of the warmest winters we’ve had in years…. GLOBAL WARMING, people!!! Be a tree hugger!

Okay… off my pedestal….

I’m back at work tonight and I got here quick. There was hardly anyone on the road. I can’t blame them though, its pretty foggy…

On the menu tonight is Amy’s Light and Lean Polenta and Swiss Chard… Of course, I’m addingMann’s Broccoli Slaw.