I awoke this afternoon to more temptation. I feel like if you have support people, they won’t surround you with your trigger foods. My mom, although I know she cares, is not what I would call the most helpful in this aspect of my life. I woke to a bag of Taco Bell filled with Caramel Apple Empanadas. Every time I confront her about bringing these home, she always says she got me one. I hate that because she knows its a trigger food! Nonetheless, my lunch, which started as a Red Berries Special K bar dipped in Be Well Nutella, ended up in half an empanada down and a heavy chest full of anxiety.

Barry called me at work last night and asked for a lunch date, today, and I gladly accepted since its was to a place I’ve been wanting to go to: Half Moon in Kennett. Barry offered to postpone the date since I had a rough time at work, but I refuse to let these disorders disrupt my life all the time!

Half Moon Restaurant and Saloon is a small place in the town of Kennett, about 20 minutes from my house. Barry and I drove past it! Whats nifty about this place is that it specializes in wild game meats. Each day is a different special.

I lucked out when I called the restaurant to find out the specials for today. Kangaroo burgers and Buffalo chili! I’ve had buffalo in the past, but I was most excited about the Kangaroo! Barry has been trying to get me to eat burgers (I’ve really wanted one since I haven’t eaten one in over a year). Kangaroo is the leanest cut of beef Half Moon offers (93 calories, 0.5g fat per 100g). All of the burgers are 6 oz portions, of which Barry and I split. We opted to split the Kangaroo burger, substitute the house made kettle chips for a salad, and split a bowl of the buffalo chili…

We strolled up West State Street and entered and narrow saloon. Greeted by a perky hostess, we were asked if we would like to be seated upstairs in the atrium-like setting or in the main dinning saloon. Since it was a temperate day with a nice breeze, we walked up the stairs to be greeted by another friendly face, Emily, who seated us and attentively served us. She was very patient with us, as I was so indecisive after viewing all of the specials! After questioning the waitress, there was no doubt about it… Chili and Burger special!

First up was Barry’s beer. This place is no joke when it comes to their alcohol. Theres a whole book full if specialty and imported beers and the wines are broken down into white and red, and then by place of origin. Barry tried Hop Devil. I’m not a beer drinker, but this was rather bitter in my opinion. We awaited a delicious salad on spring mix, with cucumbers, shredded carrots, and baby heirloom tomatoes, and side of Greek Goddess dressing. I love that they used heirlooms, since they are in season!

My girlfriends told me how dry kangaroo meat was and suggested the elk. I’ve had elk and it reminds me a lot of roast beef. I had my heart set on the roo. They don’t cook the burger past medium rare, which is fine for us. I was surprised how moist the burger was, despite being so lean. It wasn’t sweet but it had a more mild flavor than a beef burger, and it was definitely a lot less dense. The burger is served on a kaiser-type bun with lettuce, tomato, purple onion, and a pickle spear. I ate mine topless, while Barry used my spare bun half for chili dipping.

The Buffalo Chili was topped topped with jack cheese, It was a hearty chili with lots of meat and beans. I could not imagine eating this whole bowl by myself! I would have been stuffed! The tomato base was a mildly sweet and nutty, with a faint heat.

We really enjoyed the atmosphere of the atrium setting. We sat at rustic tables, surrounded by fresh air and potted plants. After chatting with out waitress, we decided we will most definitely be back for the Gator Gumbo! Apparently, its got a nice kick to it!

We drove out of Kennett and into Hockessin to grab a bit of froyo from Berriyummi. Barry went to chocolate peanut butter heaven. I think it wound up being more like a hell for him in the long run. His chocolate and raspberry froyo was topped with cheesecake pieces, cookie dough, brownie bites, jimmies, peanut butter sauce, blueberries, hot fudge and loads of mashed peanut butter cups. By the end of it all, the peanut butter cups had formed rock sold balls of sweet and salty indulgence. From the little bite I took, I had my fill. I am honestly impressed by Barry’s sweet tooth! I had never seen so much reese in one bowl! I guess this was pretty fitting since its National Fudge Sundae Day. 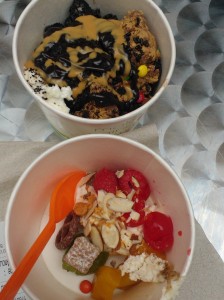 Mine was the typical sugar free vanilla with mango, raspberries and sliced almonds, with smidge of cheesecake crust.

After the creamy froyo, I had a hankering for coffee. When Barry and I arrived home, I made a mug of decaf with sugar free chocolate DaVinci syrup. With my sweet tooth in full swing, I remembered my Philly Swirl Sweet Delites. These are perfect size creamsicle bars that are sugar free and only 14 calories a piece! Talk about guilt free desserts!

I am spending the rest of the  night bonding with mom over “A Good Day to Die Hard,” and should be hitting the hay soon.