I know its not winter, but by the way Mother Nature has been treating us, I don’t think she got the memo… So on such a cold, rain day as today, I believe a warm, cozy, creamy meal is well called-for.

Preheat the oven to 350 F. In one bowl, combine the vegetables. In another bowl combine the cheeses, and in a third bowl combine the remaining ingredients (I also added a finely chopped jalepeno for heat). Add half the cheese mix to the bowl of food glue (the soup-yogurt-egg- spice combo). Once well-combined, evenly coat the mixed vegetables.

Spray a 9 x 13 dish with non-stick cooking spray. Transfer the coated vegetables to the dish, and evenly spread into the corners. Top the casserole with the remaining cheese blend. 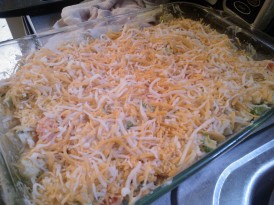 I served this with steak, and a doggie bag for pops to take with him. You could probably add the protein to the actual casserole, as well, and then bake it…. Or for a meatless meal, like I did, eat 1 1/2 servings for about 300 calories! 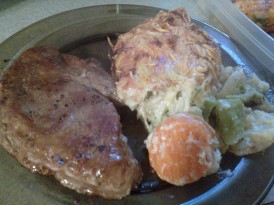 Whats not to like? The crispy cheese shell? The creamy blend hiding just beneath it? Exactly! Dig in!

I started thinking about how versatile this recipe is. With the water chestnuts and bean sprouts, I began to think about playing on the Asian influences and tweaking this with Asian sauces and seasonings. I think my favorite part of the this were the carrots. I just love how cooking carrots brings out their naturals sugars and sweetness!!

After dinner, Tuesday night, I was a bit manic. I decided the best thing to do would be to go to bed. Thank goodness I did because at 1220am I got a phone call from work.

Yeah. Is everything alright?

“You were on the schedule for 11p-7a and its not likeyou to not show. We were getting worried about you.”

I didn’t have that in my schedule and I felt terrible! I made to work in under 40 minutes! I have NEVER done that before and felt just awful about leaving my team hanging!

While I made a mug of coffee, I began stressing about food.Oh man, I already ate, but I can’t go through my shift without eating… Dad suggested a salad! Genius! I quickly tossed carrots, spinach and a cherry pepper in a container and ran off to work.

If the coffee didn’t wake me up the bitter cold of midnight did! Brrr, baby!

At 3am, we sat down to eat, and I added mushrooms, onions, and beets from the caf to round out my salad. I got to try out my new salad dressing, too! Walden Farms put out a few new dressings and the idea if a Balsamic Pear sounded spectacular! It really was good! It was probably the sweetest salad dressing I’ve ever had, so I did not need a lot of it!

I’ve worked three night shift this week. Some other featured meals of the week were Three-Shroom soup, which I made after work one morning, protein hot chocolate, and To-Go Tuna.

On a side note, I’ve never had this tuna before, and, frankly, I was a bit skeptical. Pre-packaged tuna salad?? I couldn’t believe how much I enjoyed the 90 calorie pack! I mixed it with BBQ sauce and honey mustard, and served it over some veggies from the caf.

After my final 12 hour shift of the week, I finally figured it out! I need to keep a 100 calorie pack with me for that 5am hungry strike! I couldn’t shake how hungry I was, no matter how much water I drank. Luckily, Brittany came to the rescue with Special K. Note to self: get 100 calorie pack for work! 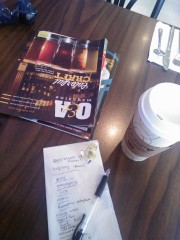 I hate when I don’t blog! The last few days have been filled with food paranoia! In fact, when I woke up from a nap, after work this morning, I grabbed pretzel sticks and peanut butter, and started feeling the heavy chest. Despite being so tired, I couldn’t be home. I was thankful my iPod was in the car. Since it was Friday, and my Friday Tradition of Banana’s Foster coffee has been setting me for a good weekend, I took a round about way with some Refrain Running to Fresh Thymes to complete a total of 2.5 miles! I sat at Fresh Thymes chatting with the girls, sipping my coffee, reading some local mags, and jotting down things on a napkin to shut my busy brain up.

I have also found myself rediscovering my love of PB&J! Weather on crackers, toast, applesauce, rice cake… heck I dipped a grape in my Better n Butter! If thats not the epitome and PB&J!

To make up for my blogging laziness, heres a new soup recipe to keep you toasty this winter! I based most of this off a South Beach Recipe.

In a small saucepan, bring the porcini mushrooms and 1/2 cup of the broth to a simmer over high heat. Remove from the heat and set aside. Spray a medium nonstick saucepan with non stick cooking spray, add the baby bellas, onion, and garlic, and cover over low heat. Cook/steam the vegetables, stirring often, until softened. Meanwhile, place the frozen cauliflower in a strainer and allow it to thaw, OR if using fresh, mildly steam in the microwave and drain excess water.

Add the remaining 3 cups broth to the soup. Drain the porcini in a strainer held over the saucepan so the soaking liquid is added to the soup. Add the cauliflower, salt, pepper, and thyme, and bring to a boil over high heat. Reduce the heat and simmer for 1 minute to heat the cauliflower through.

Meanwhile, cut the porcini into slivers, and then roughly chop. Transfer the hot soup in batches to a blender or food processor, and purée until smooth. After the first blending, add the sour cream, nutmeg and chopped porcini mushroom to the processor. While the soup is blending, drain the can of mushroom pieces and roughly chop. Return the incredibly pulverized and smooth soup back to the pot, over medium-low heat, and add the drained, chopped mushrooms and parsley. 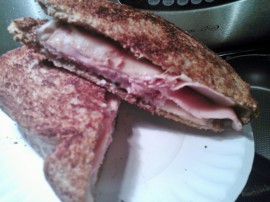 Heat the soup through and serve. Dad simply added salt and pepper, to taste, and asked for more, while Barry paired his bowl with a few shots of hot sauce and a grilled ham and cheese.