Thats what I woke up to this morning. The great thing about having a boyfriend in the military, is that you both want to stay in shape. He has two personal fitness goals: work on his pushups and run 2 mile in under 14 minutes.

While my personal fitness goals are no where near as as Barry’s, my fitness goals are to tone and to run a 5K. I am really happy that I have someone to help me achieve my goals, while I can help him achieve his.

What are your personal fitness goals?

We were supposed to be on the road rather early this morning so we decided on protein shakes. Hes a chocolate peanut butter affinity, like I do, so I made him a super chocolatey PB cup shake, with a banana thrown in. The same went for myself, although spinach was in mine, as well. After our cups of coffee, we headed to dads work to drop off the left over blueberry pancakes from yesterday. He was very appreciative. 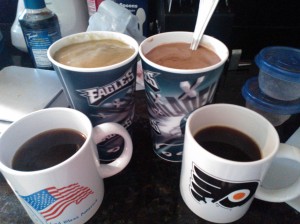 After some time in the car, Barrys inner man set in, and we made a pit stop to Burger King. We continued our drive for another hour or so, as I stared out my window, watching farmers, and animals, and beautiful scenes, almost from a picture. After a final pit stop, we finally arrived at a hidden little house, with cats, chickens, and deer in the front yard. We arrived in Reading, where I was introduced to Barry’s grandmother. She was so welcoming. It may have helped that we came bearing sweets from a local shop called Sweet Street.

Barry mentioned this place last night, and after checking out their website, I needed to check this place out! We were greeted with three boxes, each containing a free sample. I immediately went for the cube of blondie, followed by the big apple pie. We picked up a slice of blueberry cheesecake for the boyfriend, a slice a snickers pie for his Pops (grandfather), a slice of triple chocolate cheesecake (which almost put Barry into a sugar coma), and a slice of the caramel apple pie (which was spectacular.) 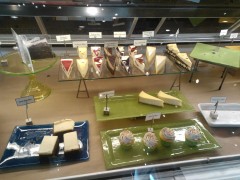 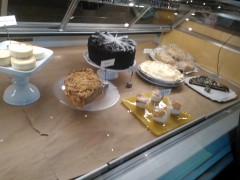 Barry’s grandmother was so funny, as she sat down with a fork and took a bite out of each one! Thats my kind of taste testing! 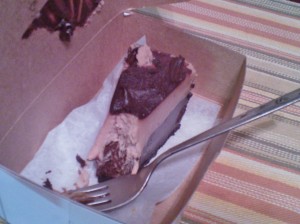 She insisted Barry and his mom show me around, so I went out back with two bananas and fed the deer. Yes, I fed deer! It was so cool! I never thought I’d be able to do that! They even licked my hands~ Deer Kisses!

We spent some time socializing before we heard some thunder, and decided to skidaddle before the storm hit.

We finally arrived home, with a growling stomach, I might add. Since dad wasn’t too keen on trying my Kashi Mediteranean pizza. Check this out: “spinach, fire-roasted red onions and sweet red peppers, four signature cheeses including feta and a zesty roasted red pepper sauce on our wood-fired crust made with whole grains…Made with our signature blend of 7 Whole Grains & Sesame with flaxseed.” 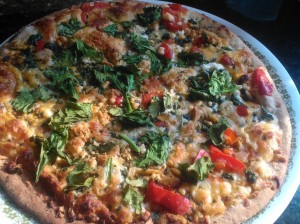 Flaxseed crust? Feta? Spinach? Peppers, onions, and tomatoes? Sound delicious right? WRONG! I was so disappointed! I added some extra spinach when I realized how little there actually was. After the first bite, Barry and I tried to season up this circle of cardboard with garlic, red pepper flakes, even BBQ sauce! Nothing helped! I really hate to give bad reviews and I am always a fan of Kashi, but this was just no good.