I found a ham in the freezer and decided to make that NYE dinner. So after some brainstorming, I concocted a glaze with my mom, with her not knowing there was hoisin in the mix. (I say that because she is very hesitant to try new things…) Then, I remembered this stuffing, or dressing as Emeril calls it, that a friend of mine had made. So now I have an Asian influenced ham and a Cajun stuffing. Casian! I thought I was so clever until trying to make a seasoning for the next side dish. Turns out there is already a culinary Cajun-Asian trend. wah-wah

Preheat the oven to 400F. Combine all the cornbread ingredients into a bowl and mix well. Transfer into an 8×8 baking dish either sprayed with non stick cooking spray or lined in parchment paper. Bake for 25 min. Remove and allow it to completely cool. Meanwhile, work in the rest of the recipe.

In a large skillet, cook the sausage, onions, celery, bell peppers, garlic, with the buttery spread and 2 Tbsp water. Cover with a lid and let them sweat for about 5 minutes. Remove from the heat and transfer to a large bowl to cool.

Preheat the oven to 350F. Transfer to a 9×13 baking dish that has been sprayed with nonstick cooking spray. Cover with aluminum foil and bake until heated through, about 25 minutes. Uncover and bake until golden brown, about 15 minutes

*I typically make the cornbread the day before and crumble just before mixing. I tear the bread, as well, the day before, so it has time to become stale.

*I have made like with diet cola, and it is still delicious. I just cut back on the hoisin by a tablespoon, as the cola already has a syrup-type heaviness.

Combine everything into a small sauce pan. Bring to a boil, then reduce heat to simmer until it thickens to your liking. Than glaze away.

I like to use half for the first glaze, then re-glaze with the remaining towards the end of the bake, so to get the caramelized edges!

I know greens are supposed to bring luck in the New Year, so I whipped out a bag of broccoli rabe from the freezer. (I know, Italian greens… We had a multi-cultural New Year!) I wound up trowing tons of garlic, julienned sweet peppers and onions, toasted sesame seeds, teriyaki and soy sauces, red pepper flakes, and come cajun seasoning into the mix. They went pretty quickly! 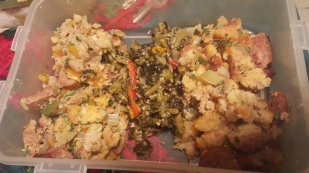 How do you bring in the New Year? Family Traditions? Superstitions?

Here’s a whole list of superstitious foods to bring in the New Year, compliments of Wholefoods, some of which I may actually do…

5 Foods To Serve For A Lucky New Year

Of course, us Guidos, bring in the New Year with a shot of Homemade Sicilian Sunshine AKA Limoncello!