Most of the time, you’re scrolling down your facebook feed, repost animal videos or ‘liking’ a status, or bitching about that damn snow plow creating a 5 foot wall so you can’t get to you car… 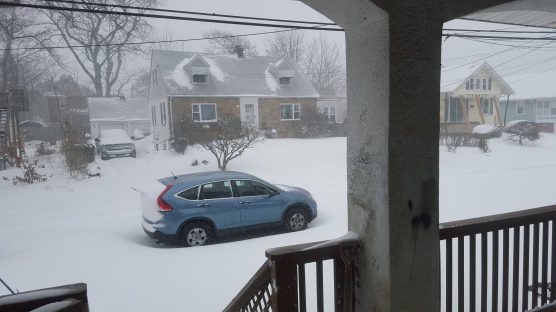 (yeah, we got our first big snow storm)

Sometimes, you stumble upon an excellent Buzzfeed vid… But I owe this one to TipHero… 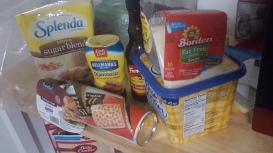 Preheat oven to 350 degrees F. Line a 9×13-inch baking dish with parchment paper. On a silicone mat or lightly floured cutting board, roll out your pizza dough until it’s about 12 x 18 inches.

Break your slices of cheese into quarters and evenly distribute on the dough. Then distribute the turkey.

Gently, but some-what tightly, roll up the dough. Cut the roll into eight equal slices and lay them in a baking dish. 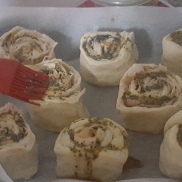 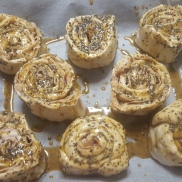 In a bowl, combine the buttery spread, Splenda, worcestershire sauce, dijonaisse and poppy and chia seeds. Microwave 2- to 25 seconds. Stir until butter and sugar are completely melted. Spoon the glaze over the tops of the pinwheels. Bake for 25 minutes.

Let’s make it a bit more lean by substituting turkey for ham, and add a bit of fiber but maintain the nuttiness but tossing some chia seeds in with the poppy seeds. We also were able to seriously cut back on the butter by using dijionaise.

Of course the bubbly melted cheese! But, no! That;s just a bonus! The real shining star is this glaze! Oh my goodness! I want it on everything!!! Just sweet enough, just tangy enough!

Mom has a mild obsession with Pillsbury Buttery biscuits and she had two dough patties left that didn’t fit on her baking sheet. I wound up making her mini versions using her black forest ham. “I want your cheese,” she says. Usually when she refers to MY food, shes being sarcastic, but this time she wasn’t. “It’s fat free Swiss,” I replied. “What? Really! I don’t even like Swiss.” So there ya go, folks, trick your parents to better their health and expand their palate…

Theres is not a day that goes by that I do not thank God for his blessings. I don’t just thank Him for family and friends and shelter, but for the strength that He gives me, the drive and determination that pushed me through school, and for the ever-growing, ever-opening heart that HE has given me.

When I see videos like this I can not help but thank God over and over and over again for blessing me to be one of the people that can make a difference in this hectic, scary world.

I LOVE what I do. It is NOT to be thanked or praised, but because we make a difference.
We are the shoulder for someone to cry on. We are the fighters that won’t stop fighting. We are here to help those who cant help themselves.

I LOVE what I do.

There is this damn popular soup out there and it goes my many names but they have the same core ingredients: tortellini, sausage, onion, greens, and tomatoes.

I naturally wanted to but my own spin on it, make it a bit leaner, but still rock the flavor!

In a medium pot over medium high heat combine onions through red wine, with a splash of water, and cover with a lid. Let everything steam and reduce about 5 minutes.

Add the cubed chicken, and remaining ingredients. Cover with a lid, reduce heat to low, and simmer for 30 minutes until chicken is cooked.

*Measure whole fennel seeds, and using a good chopping knife, chop up the fennel seeds. Use one hand to cup over the seeds as you chop because the particles of seeds will fly.

** Most easily done with a semi-thawed/partially defrosted cut of meat.

I don’t even miss the tortellini. I could probably throw in some tofu shirataki noodles or zucchini noodles, if I really wanted to, when I serve up the soup. The fennel seeds and paprika, mimic the flavors you would find in pork sausage. The brothy soup, in combination with the beautiful green spinach, really fills you up, without the carbs and calories of the tortellini, and the wine… well wine not?!

I topped my soup with some chickpeas/garbanzo beans that I toasted up in the oven, to sub for the crackers or croutons.

I found a ham in the freezer and decided to make that NYE dinner. So after some brainstorming, I concocted a glaze with my mom, with her not knowing there was hoisin in the mix. (I say that because she is very hesitant to try new things…) Then, I remembered this stuffing, or dressing as Emeril calls it, that a friend of mine had made. So now I have an Asian influenced ham and a Cajun stuffing. Casian! I thought I was so clever until trying to make a seasoning for the next side dish. Turns out there is already a culinary Cajun-Asian trend. wah-wah

Preheat the oven to 400F. Combine all the cornbread ingredients into a bowl and mix well. Transfer into an 8×8 baking dish either sprayed with non stick cooking spray or lined in parchment paper. Bake for 25 min. Remove and allow it to completely cool. Meanwhile, work in the rest of the recipe.

In a large skillet, cook the sausage, onions, celery, bell peppers, garlic, with the buttery spread and 2 Tbsp water. Cover with a lid and let them sweat for about 5 minutes. Remove from the heat and transfer to a large bowl to cool. 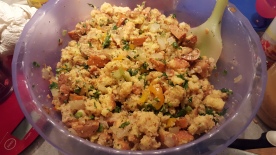 Preheat the oven to 350F. Transfer to a 9×13 baking dish that has been sprayed with nonstick cooking spray. Cover with aluminum foil and bake until heated through, about 25 minutes. Uncover and bake until golden brown, about 15 minutes

*I typically make the cornbread the day before and crumble just before mixing. I tear the bread, as well, the day before, so it has time to become stale.

*I have made like with diet cola, and it is still delicious. I just cut back on the hoisin by a tablespoon, as the cola already has a syrup-type heaviness.

Combine everything into a small sauce pan. Bring to a boil, then reduce heat to simmer until it thickens to your liking. Than glaze away.

I like to use half for the first glaze, then re-glaze with the remaining towards the end of the bake, so to get the caramelized edges!

I know greens are supposed to bring luck in the New Year, so I whipped out a bag of broccoli rabe from the freezer. (I know, Italian greens… We had a multi-cultural New Year!) I wound up trowing tons of garlic, julienned sweet peppers and onions, toasted sesame seeds, teriyaki and soy sauces, red pepper flakes, and come cajun seasoning into the mix. They went pretty quickly!

How do you bring in the New Year? Family Traditions? Superstitions?

Here’s a whole list of superstitious foods to bring in the New Year, compliments of Wholefoods, some of which I may actually do…

5 Foods To Serve For A Lucky New Year

Of course, us Guidos, bring in the New Year with a shot of Homemade Sicilian Sunshine AKA Limoncello!