Welcome to 2014! I hope you all have had a wonderful start to the new year!

My NYE began as it usually does… 48 hours of The Twilight Zone on SyFy! 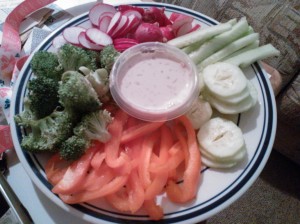 I prepared with a beautiful tray of crudite, and shrimp cocktail! I made my Mexican chicken and added beans, corn, and pepper. While I was chopping up veggies in the kitchen, I ignored the call on my cell phone. Before I knew it, dads cell was blowing up. “Sam, mom said Frank just collapsed! WHAT??!?!

I turned everything off in the kitchen, threw on shoes and ran out the door to my mom’s house. Its definitely times like these that I am thankful my parents live so close to each other! Upon rushing into the house, my mom was on the phone with 911, and I began to assess Frank.

I uttered words that no daughter wants to say to her father… “Frank, you’re having a stroke…”

By the time the paramedics arrived, they reassessed him and his condition had worsened. I gathered his medications and loaded into the ambulance with the rest of the crew and we were off to the hospital. During the drive, his symptoms came and went. It drove me nuts! I could not tell what was actually happening!

In case you were wondering, here are few ways I knew Frank was experiencing a stroke:

His condition continued to worsen to the point where he could not squeeze my hand, he could not flex his left foot, he ignored anything on the left side, and couldn’t even feel me holding his hand.

After a discussion with the doctor, I signed a consent for Frank to receive TPA, a super clot buster, within the magical 3 hours. I was terrified and torn. This is a controversial medication that has a 33% of a brain bleed. I nervously signed the paperwork, and I am incredibly thankful I did. After some hours of waiting with my brother, James, dad came to pick me up since there wasn’t much more I could do, but wait. The next 72 hours and followup CAT scans would be crucial.

I arrived home to eat the dinner I had made and actually fell asleep before the ball dropped. Dad woke me up for the ball drop and I immediately fell back asleep.

Frank was transferred to the ICU in the middle of the night and diagnosed with a TIA (transient ischemic attack). In short, its a mini-stroke that temporarily occludes a blood vessel in the brain and deprives the brain of oxygen.

Frank is home now, he came home yesterday, and is back in action! We are very lucky that the attack was caught and treated quickly. He is walking and talking with only a mild weakness in his left hand, which he is working on. 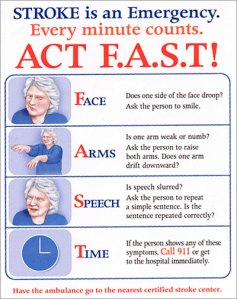