I couldn’t decide if I should sleep today or not. Taking naps usually keeps me up later that night and with clinical bright and early tomorrow morning, I did not want to have issues sleeping. I was going to finish Friday’s run after work today as I headed to Church. It rained the other day, and temperatures have really dropped, here in Wilmington. Life had other plans for me. I apparently locked me keys in my car last night, and didn’t realize it! Yay for work having security jimmy into my car! After standing in the cold, I was wide awake and decided to treat myself to some Brew Ha Ha (despite the three cups of coffee I had had over night). I got my favorite: The Brew Ha Ha! Latte! Raspberry…. mocha… espresso! I got them to use the sugar free syrups and skim milk (and nix on the whipped cream), and it was a nice way to reward myself on my good eating. (I always love a little cinnamon on top! 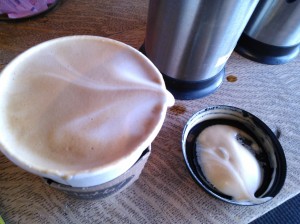 The remainder of the morning was spent with my nose in my laptop. Not working on the blog, unfortunately  but trying to finish up some projects. I’m a fan of Tuna Helper, and especially tuna melts, but I have never had Tuna Casserole. I feel like hot tuna has a bad rep…

I ask my stepdad if he liked tuna casserole, and he was super excited! I’ll take that as a yes. For the next few days, he kept asking if I had the ingredients to make it. I thought it was nice of him to see if I needed anything. Now, its annoying. “Well I make it this way… what kind of noodles are you using?” “Do you have enough soup? Noodles get really dry as leftovers…” “What are you using for the crunchy top. Its gotta have the crunchy top.”

Are you cooking? No? Okay, then shoosh! Geez!

For dinner, I made Rockin’ Tuna Noodle Casserole using HungryGirl’s recipe. I dare not tell my family the ingredients I use, such as tofu shirataki noodles, because then I have to hear flack about it. Like, hello, you didn’t notice the difference until I just told you. Stop talking and keep eating! (Wow, I’m a little feisty today. Must be the sleep deprivation.) 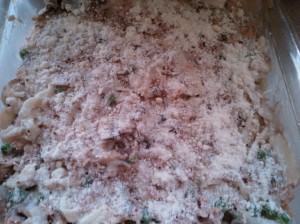 I added Bundo’d this baby by using two 5 oz cans of tuna fish, a bunch of chopped mushrooms, and a small, sauteed chopped onion and garlic. This turned out really good and a big hit among the shirataki skeptics! Just follow the HG recipe but add the shrooms, onion, and garlic. I found that a sprinkle of black pepper, garlic powder, and a pinch of salt did the trick! Steamed broccoli was the perfect partner!

This creamy dish was followed by melon and cottage cheese for dessert!

As of now, I have officially been awake over 24 hours, and I am starting to feel it. I am going to try to watch some lecture, but I’m not making any promises. I hope you all have had a great weekend, and cheers to a new week! (Psst… did you know that exactly one month from month, I’ll be a college graduate?!)

PS. The 100th post is coming up! Any suggestions or requests?