My alarm sounded at 545 pacific time. I hit the snooze alarm, and closed my eyes thinking about how long I had to before I needed to be ready to leave.

After hitting the second snooze alarm, I decided to take advantage of the early morning and took it as a sign to get motivated. I had just enough time to complete a 30 minute treadmill work out that looked like this: 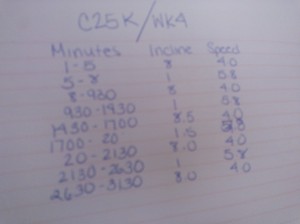 And I had ten minutes to spare to clean up and change in time for Church, grab a coffee and banana for the walk and be on my way. 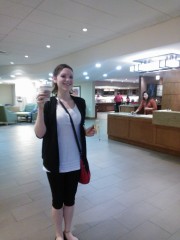 I like attending new Churches. I find that no Church, no mass is the same. Each priest, choir, altar presents differently. Cathedral Basilica of St. Joseph was a large and beautiful Church. Rather than pews, the seats were circled around the altar. It was decorated with Lilly’s from the Easter season, and the priest gave a great homily! 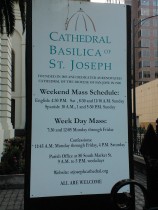 Afterwards, we wondered around downtown in an attempt to find something entertaining. I wanted to check out a vegan cafe, but it turns out they don’t open until 11. We wound up walking to Bijan Bakery. I ordered a mushroom and spinach quiche. The crust was flakey and buttery! I paired this with a raspberry pomegranate green tea that so unique. My taste buds went wild at the first sip!

And look at all the beautiful treats! 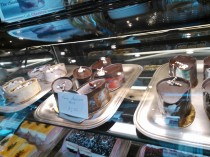 We continued to wander around the city. We had all woke up so early that it seemed so much later to us. Nothing was really open yet so we walked back towards the hotel. We split up, me heading to my room to work on some homework, and them going to the art museum.

It was time to head to the educational forums at the convention. I chose to attend “Leading with Ethics.” I’ve chosen my forums based on what I think will be useful in my career as a nurse. Nursing requires delegation and leadership, and ethics is always a controversy on the medical field. My overall summary of this session is : All ethics begin with self ethics. In order to be an ethical leader, I must first understand my own values and how to value others, and this will allow me to recognize how others would like to be treated. What is the intent of my actions? Am I bettering my community?

After a busy afternoon of flag bearer practice, I ran to grab a quick bite. While planning for this trip, I found a restaurant called Good Karma Vegan Cafe. I hadn’t eaten since breakfast so I ran over to grab dinner. The place was very small, but had a very eclectic feel with great music playing! They served different types of beer, some organic. Their menu consisted of a rice or quinoa platters, burritos, desserts, and more. To get the experience I opted for a 3-dish platter. Rather that eating it with rice or quinoa, I asked for steamed vegetables. You create your dish by choosing one, two, or three items from their cold box, and they heat it up. I wanted to try things that I never had before so I chose the following:

As she brought over my meal, I could not imagine finishing the whole thing. They are NOT sparing on the helpings. From the minute the first carrot touched my lips, I was sunk! I devoured every bit of this meal! The Spicy Basil Tofu contained was in mildly spicy sauce, while the Jamaican Tofu kicked it up just a bit, both dishes containing vegetables. I think the dish I was most surprised by was Pra Ram. I asked about this dish since I’ve never seen it before. Its a noodle dish with vegetables in a peanut coconut sauce. I typically stay away from all things containing coconut milk, but this seemed like an exception. Oh! My! Goodness! This was the first thing I finished off my plate! This a recipe I must make when I get home!

After my meal, I went up to the girl behind the counter and raved about the meal. We don’t have anything like this at home and the food was spectacular! I raved about it all day. “Do you like baklava?” was her reply. “Yes.” “Here you go… on the house!” The baklava was how it should be: not drenched in honey, just sticky and sweet enough to feel like a treat! 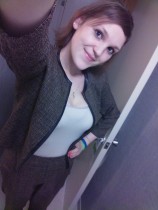 After changing for the opening ceremonies, a representative from every state, or nation, went on stage and waved their flag. I was honored to represent Delaware, the third one called. By the time all the others were called, my arms were wearing out from waving the flag. (No need to work on my upper body today, haha).  At the ceremonies, our region won the the Distinguished Regional Officer Team Hallmark, and Regional Milestone Award!